Back, Briefly. An Update!

I’ve been away because life has been busy. I usually don’t have time to write during term, due to the business and busy-ness of clinics. January to March was spent as part of my Chest firm (Lungs and heart, with some ENT sprinkled in).

It was a fun experience, and I’ve learned the important reflection that ‘what is common is common’.

I’ve also been doing a lot of Crossfit which has been great, and I’ve seen lots of improvement. I finished the Open in 2479th position out of 19687 in the Europe region, which I’m happy with.

Outside of medical school, I’ve been more proactive in my interests in sports medicine, preventative medicine and public health.

First off – I attended the Isokinetic Football Medicine conference at the Queen Elizabeth II centre, which was three days of incredibly varied and interesting topics from the football world. Now, I’m a rugby man myself and round balls are not familiar to me, but I learned about teamwork, sudden cardiac death, the Muamba incident, and some useful screening and recovery tools. Hopefully more on this in the future.

After these hectic days, I took the train to Manchester to spend a few days at Joe Lightfoot’s gym Result’s Inc.

It could have disintegrated into a two-day-bro-sesh, but what resulted was a beautifully composed two-day-ideas-and-enlightenment-symposium. I spent time coaching, talking shop, and finding out about Joe’s progression through medical school to the position he is in now.

Subsequently, I’m proud to say I’ve joined the Move Eat Treat campaign; it strives to educate medical professionals about the importance of exercise and lifestyle in the prevention and management of disease. I’m approaching the campaign efforts through Instagram – ask me about it. #MoveEatTreat (Twitter, Facebook, Insta) .

I’ve got a few blog posts. I love blog posts. I wish I could write more. I’ve learned about Fight Club and the Salmon Lifecycle to make these, and have listened to much motivational movie soundtracks. Read the posts by clicking the links below.

We also got a dog. 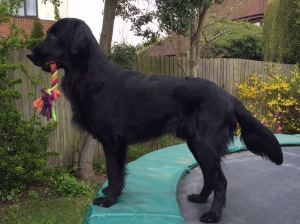